Calm yourself with Buddha statues in your home.

Zen Buddhism is the school of Mahayana Buddhism which is believed to have been started and developed in China in the 6th century as Chan. Chan is a rather Chinese rendering of the Sanksrit word dhyana, or a mind absorbed in meditation. The state of Chan can be defined as the state of absorption of meditative state. Therefore, Zen Buddhism or Chan Buddhism can be translated as "Meditation Buddhism". Zen Buddhism focuses the insight into the nature of the Buddha and the use of this insight in the daily life of a person. It focuses on the knowledge of sutras or doctrines of the Buddhist principles which results into the direct understanding and interaction with an accomplished teacher. 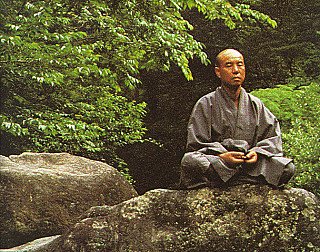 The teachings of Zen consists of various Mahayana thought sources like Yogacara which has their focus and emphasis on the Buddha like nature and the Bodhisattva ideal. For this the Prajnaparamita literature, Madhyamaka and the Tathagatagarbha sutras have also been influencial in Zen Buddhism. Zen emerged as a very unique school of Mahayana Buddhism when an Indian sage, Bodhidharma started teaching at the Shaolin Monastery in China.Bodhidharma is considered as the first Patriarch of Zen. His teachings mixed the philosophy of Taoism with Buddhism. These two philosophies so profoundly impacted each other that some philosophers and texts are claimed by both the religions. The early Mahayana philosophies of Madhyamika and Yogacara played an important role in the development of Zen Buddhism. Later through the course of time, by the time Zen Buddhism was introduced to its sixth patriarch, Huineng, the philosophy was relieved of most of the vestigial Indian origins and principles, leaning more and more towards Chinese culture. Therefore, there are some Zen Buddhist who claim Huineng as the true father of Zen rather than Bodhidharma.

Huineng's tenure as the patriarch was at the beginning of the golden age of Zen which rapidly flourished during the same period as the Tang dynasty in China. Zen Buddhism was later spread to Vietnam in an early manner in this era and also a number of teachers played their part in the transmission of Zen Buddhism to Korea during the Golden Age. The western world got introduced to Zen Buddhism rather later in the history as they took an interest in Zen after World War II. Despite a late introduction, Zen has been establishing itself into new territories in North America, Europe and elsewhere in the world.

According to Bodhidharma, Zen has been defined as -

"A special transmission outside the scriptures;

No dependence on words and letters;

Direct pointing to the mind of man;

Zen Buddhism is sometimes known as the face to face transmission of the dharma outside the sutras. The teachers of Zen have been able to spread their realization and knowledge about dharma to students by teaching and practicing with them in person or face to face, making it difficult to track the lineage of teachers, throughout the course of history and time. A genuine Zen teacher and practicer is able to trace his or her lineage of teachers back to Bodhidharma, and before that to the historical Buddha and before that the Buddhas before the historical Buddha, the 5 Dhyani Buddhas. This is the reason why the influence of Zen Buddhism is clearly seen on many Buddhist art like Buddha statues from China.

More of our beautiful statues in our gallery