View our collection of Buddhist temples and Shrines

The Amaravati Mahachaitya is also known as Great Stupa, or just Amaravati Stupa. It is believed that Amaravati Mahachaitya was built in phases between the 3rd century BCE and about 250 CE, at Amaravathi village, Guntur district, Andhra Pradesh. Currently, the original Mahachaitya is ruined so the site is under the protection of the Archaeological Survey of India. The important sculptures from the sites are now shifted to various museums in India and abroad. 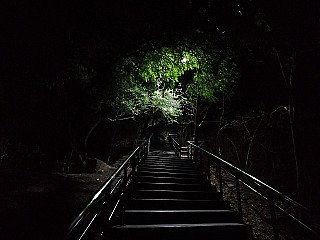 Even though it is believed that the Mahachaitya was established in the 3rd century BCE in the time of Asoka, there are no clear evidence for the establishment. The earliest inscription found till date mentions the site belongs to the early centuries BCE but it cannot be assign to Asoka.

The construction of Amaravati Mahachaitya was completed in two main phase. In the first phase, the chaitya was established along with the additions consisting of railing and carved slabs placed around the stupa. These slabs were also called drum slabs because they were placed round the base of the stupa. These slabs has a shape similar to a circular drum. These drums were added later, in the early construction the stupa has a simple railing consisting of granite pillars along with plain cross-bars, and coping stones. Considering the size of the granite pillars, it can be assumed that the stupa must have been fairly large at the time of construction.

The second phase of the construction was started around 50 BCE and continued till 250 CE. On the basis of the dates, Akira Shimada divided this period into three phases. The first phase was from 50-0 BCE, the second phase was from 50-100 CE, and the third phase was 200-250 CE. There were other types of sculpture that belongs to later period, the 7th or 8th centuries also. These statues includes standing Bodhisattvas, goddesses and also some of the Buddha statues.

Recovery of the sculptures of Amaravathi

Major Colin Mackenzie first learned about the ruins of the stupa at Amaravati in 1797. He came across a huge Buddhist construction but when he returned again 1816, he found that the monuments were already destroyed due to indiscriminate excavations. He also found out that the bricks used for the construction of Mahachaitya were taken by the locals to build their houses. Mackenzie carried out further excavations and recorded what he saw and then drew a plan of the stupa.

Sir Walter Elliot explored the area around the stupa in 1845. He excavated near the west gate of the railing, there he removed the sculptures to Madras Museum. Dr. Edward Balfour was concerned that the artefacts belonging to Amaravati were deteriorating. Therefore, in 1853 he started to raise a case for them to be moved. He then arranged to make a copy of the artifacts by photographing and drawings. These copies were called Elliot Marbles and are now in the British Library. The sculptures were exported to London in 1859. The further excavations was done in the 1880s by Robert Sewell. He recorded the excavations in some detail with drawings and sketches.

There was plans for the preservation of the sites. It was purpose to build exhibition space for the sculptures that are still present at the site. These plans were created since the marbles that are not in an air conditioned store were said to show signs of damage from the atmosphere and salt. It was also known that the Chennai museum has plans for an air conditioned gallery to install the sculpture. These planning are still in the documents only, the implementation has not been finalized.