Angkor Wat is a temple complex in Cambodia which is regarded as the largest religious monument in the world. The temple complex was built by Khmer King Suryavarman II in Yasodharapura, the capital of the Khmer Empire. It was originally constructed as a Hindu temple of god Vishnu for the Khmer empire but was gradually transformed into Buddhist temple towards the end of 12th century. But if we look at the history there was the tradition of building Shaiva tradition and this temple was the first ever temple that was dedicated to Vishnu breaking the Shaiva tradition of the previous kings.

The temple is at the top of the high classical style of Khmer architecture and has become a symbol of Cambodia.

After 27 years of death of Suryavarman II, Angkor was sacked by the Chams. Thereafter, the empire was restored by a new king, Jayavarman Vii. He established a new capital and state temple a few kilometers to the north. During his regime, the state religion was transformed to Buddhist from Hindu and till today, people follow Buddhism.

The temple complex had welcomed foreign visitors in its premises. These foreign visitors have given commentaries about the temple complex. For example, Antonio da Madalena visited in 1586 and shared the beauty of the place. French naturalist and explorer Henri Mouhot also visited the temple premises in the mid 19th century and popularized the site in the west through the publication of travel notes. It is also mentioned in inscription that Japanese Buddhist pilgrims visited the temple premises and established small settlements alongside of the Khmer locals.

Angkor Wat is a unique combination of the temple mountain and the later plan of concentric galleries. It is believed that the temple is a representation of Mount Meru, the home of the gods. The other central quincunx of towers symbolizes the five peaks of the mountain. The walls and moat symbolize the surrounding mountain ranges and ocean.

It has been seen that the Angkor Wat is the prime example of the classical style of Khmer architecture. Therefore, the Khmer architecture is also called as Angkor wat style. It has been recorded that the Khmer architects had become skilled and confident, when they use sandstone as the main building material. They also use laterite for the outer wall and for hidden structural parts. But it is still unknown the binding agent that used to join the blocks but many of the scholars have suggested that these binding agents are natural resins or slaked lime.

Architecturally, the elements characteristic of the style include: the ogival, redented towers shaped like lotus buds, half-galleries to broaden passageways, axial galleries connecting enclosures, and the cruciform terraces which appear along the main axis of the temple. The temple includes decorative elements like devatas, bas-reliefs, and on pediments extensive garlands and narrative scenes. It is found that some elements of designs were destroyed by looting and the passage of time. These elements includes gilded stucco on the towers, gilding on some figures on the bas-reliefs, and wooden ceiling panels and doors. 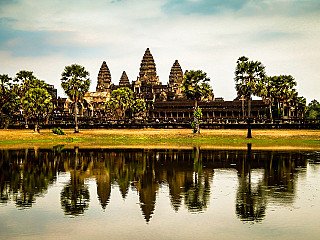 The outer wall is surrounded by a 98 ft apron of open ground and moat of 620 ft wide. The temple is accessed by an earth bank to the east and a sandstone causeway to the west. It is recorded that the main entrance was added latter. It is assumed that this entrance was build replacing the wooden bridge. At the cardinal points, there are gopuras and among them the western is the largest and has three ruined towers. The southern has the statue of Vishnu. Between the gopuras, the galleries have been installed. These galleries have square pillars on the outer side and a closed wall on the inner side. The west face of the wall is decorated with dancing figures while the east face is decorated with balustered windows, dancing male figures on prancing animals, and devatas.

The temple is built on a terrace raised higher than the city. The temple constitutes of three rectangular galleries which rises to a central tower. Because the temple faces west, the features are all set back towards the east. This architectural design leaves more space to be filled in each enclosure and gallery on the west side. For this reason, the west facing steps are shallower than those on the other sides.

The outer gallery is established with pavilions at the corners. The gallery connects the outer gallery to the second enclosure on the west side which is a cruciform cloister. This cloister is also called Preah Poan of the Hall of the Thousand Gods. In this cloister over the centuries, the pilgrims have left the Buddha statues but currently most of them have been removed from there. This area has many inscriptions mostly written in Khmer languages and some of them are written in Burmese and Japanese.

The outer gallery is mostly painted with the series of large scale scenes depicting episodes from the Hindu epics the Ramayana and the Mahabharata. These scenes are painted on the inner walls while the eastern gallery has the most celebrated scenes showing 92 asuras and 88 devas. Even the pillars includes the decorative motifs.

Our collection of Buddhist temples / shrines in our gallery